Posted at 17:26h in News by Concierge 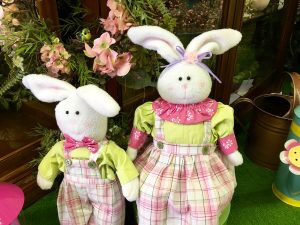 Marge’s Specialties is proud to announce:  2012 spring season merchandise is on full display.

Spring flowers and floral arrangements, spring wreaths, Easter merchandise and much more.  We have one of the largest Easter displays in Florida.

Please enjoy the story of the Easter bunny origins below.

We hope to see you soon at Marge’s Specialties.

The Easter Bunny is not a modern invention. The symbol originated with the pagan festival of Eastre. The goddess,  Eastre, was worshipped by the Anglo-Saxons through her earthly symbol, the rabbit.  The Easter bunny has its origin in pre-Christian fertility lore. The Hare and the Rabbit were the most fertile animals known and they served as symbols of the new life during the spring. The Germans brought the symbol of the Easter rabbit to America.  The bunny as an Easter symbol seems to have origins in Germany, where it was first mentioned in German writings in the 1500s. The first edible Easter bunnies were made in Germany during the early 1800s. The first bunnies were not made of chocolate; they were made of pastry and sugar. 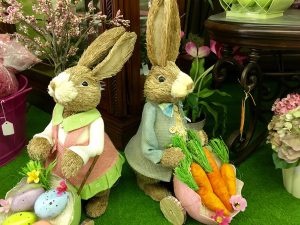 It was widely ignored by other Christians until shortly after the Civil War. In fact, Easter by its self was not widely celebrated in America until after that time.

As I mentioned the Easter bunny was introduced to American folklore by the German settlers who arrived in the Pennsylvania Dutch country during the 1700s. The arrival of the “Oschter Haws” was considered “childhood’s greatest pleasure” next to a visit from Christ-Kindel on Christmas Eve. The children believed that if they were good the “Oschter Haws” would lay a nest of colored eggs.

The children would build their nest in a secluded place in the home, the barn or the garden. Boys would use their caps and girls their bonnets to make the nests. The use of elaborate Easter baskets would come later as the tradition of the Easter bunny spread.

From the earliest times, the egg was a symbol of rebirth in most cultures. Eggs were often wrapped in gold leaf or, if you were a peasant, colored brightly by boiling them with the leaves or petals of certain flowers.